Few of us are lucky enough to be able to splash a grand on our first bike. Instead, this tends to be the price range for people who’ve already spent some time with their first mountain bike and have decided they want something a little more serious to take their riding to the next level.

You now find several full-suspension machines here (rather than just the hardtails – mountain bikes with front-suspension only – that we used to expect). The industry also seems to have settled in terms of wheel size, meaning the majority of bikes at this price will now use 27.5in / 650b wheels.

Every machine here can be happily pushed into service at any trail centre, most types of cross-country race and any sort of general off-road exploration.

Any bike you choose in this price bracket is going to help get more out of you and your riding – which, after all, is why we ride a bike.

Best mountain bikes for £1,000, as rated by our expert testers

We dubbed Boardman’s MHT 8.9 an instant classic when it arrived earlier this year. Russell Burton

If you’ve got £1,000 to spend on a quick trail hardtail then this absolutely has to be on your shortlist because its ride is capable of outclassing nearly everything else in its category.

As a rework of Boardman’s fast trail 29er, the MHT is more evolution than revolution. It’s blisteringly fast, with a lot of that pace coming directly from the Boardman’s lack of overall weight. Pop it on the scales and you’d see it actually comes in at around 2kg lighter than most similarly priced bikes.

Its understated alloy frame is paired with a very capable RockShox Reba RL fork, while a sorted Shimano SLX 1x drivetrain with 46t crawler cog should see you up the steepest of inclines.

The MHT can even lend itself to commuting duties thanks to its rack mounts, low overall weight and hardwearing tyres.

It’s a different proposition from the full-suspension bikes you’ll find in this list, but if you like going quickly and don’t suffer with a bad back then it could be the smarter choice.

While not revolutionary, the geometry is on the money for an easy-riding trail bike. Laurence Crossman-Emms

Okay, so this bike is technically £105 over budget (after you’ve bought the discount card from GO Outdoors) but it’s such an incredible bike for the money you’d be crazy for not trying to stretch that little further beyond the £1,000 budget to get your hands on it.

The 2020 version of the Bossnut has 130mm of travel, two bottle cage bosses under the down tube, external cable routing and a port for an internally-hosed dropper post on the seat tube.

The geometry is on the money for a trail bike, too. The size large has 460mm reach, a 66-degree head angle (1-degree slacker than the outgoing bike) and a 74.5-degree seat tube angle.

The kit on this bike is amazingly sorted for the cash, and the places where Calibre has saved money will give you a clear path to upgrade this into an even better machine.

Out on the trail the Bossnut left us wondering whether, for the money, any other bikes can even compete. Granted, it’s not perfect, but it’s about as close as you’ll find for the cash.

Calibre has made a name for itself as the brand to beat when it comes to affordable bikes in the UK. Steve Behr

Building on Calibre’s fantastic success thanks to its top-value and high-performing Rake, Line 10, Bossnut and Sentry models, the Line 29 takes the brand’s well-known formula for success and applies modern, progressive geometry to the mix.

On the trail, the great geometry combines with the generous spec to form a bike that feels confident and composed on techy descents, riding predictably and demonstrating that a £900 bike needn’t be ridden conservatively.

A few spec changes – such as the tyres – and the Line 29 will be just as handy riding XC as it is on the descents. For the money, it’s a truly impressive performer.

With a carbon frame and solid spec, you’d be forgiven for assuming the Bizango was twice the price. Andy Lloyd

The carbon-framed Bizango looks like a much more expensive rig thanks to its internally-routed cables, modern geometry and sleek, uninterrupted lines. It’s 1x specific – so no front mechs – and this helps improve its stiffness.

The great-looking frame is specced with top-choice parts, too. Shimano’s MT-400 brakes, SRAM’s 12-speed XS Eagle drivetrain and a RockShox Judy fork combine to propel the Bizango beyond cross-country-only rides.

It gives more expensive XC bikes a run for their money and leaves its rider with few excuses for not keeping up.

The geometry helps it descend confidently but the carbon frame lacks comfort when riding. Although, for the price, there’s very little that rivals the Bizango Carbon.

The Titan X has great suspension and parts for the price, but dated geometry holds it back. Steve Behr / Immediate Media

When Halfords originally developed this bike, the goal was to make a full-suspension mountain bike with a 12-speed drivetrain and a dropper post, for under a grand.

Needless to say, we were left scratching our heads as to how they would do it. Even more astonishingly then, they not only achieved that goal, but it’s now down to £850.

How exactly has Halfords achieved it? Well it’s certainly not the most refined looking package, but this doesn’t affect performance on the trail, so we think that’s one compromise worth making.

The geometry might not be as progressive as pricier options, but it’s by no means a throwback and it impresses on both climbs and descents.

The dropper post is a big performance gain too, and while the handling over technical terrain isn’t the best available, there’s no getting past how good the kit is on this bike is for the price.

Our only major concern is that the three-size range can’t accommodate the smallest or tallest riders out there, but for people around the middle of the curve this won’t be an issue.

The Jamis Dakar is slightly dated, but still shines on the trail. There was Woodman / Russell Burton

Another top value bike for exactly a thousand pounds is the Jamis Dakar A2. It wasn’t quite capable of dethroning the Calibre Bossnut of its top spot but it sure came close.

Like the Bossnut, the Dakar comes with an enviable spec for the money, but we were a little disappointed to see a QR fork.

We praised the Dakar for its controlled suspension, well-balanced handling and top component choices. We were also very impressed with the finish of the frame with its triple-butted tubes, tapered head-tube and internal cable routing.

Although progressive for a budget bike, the geometry on the Jamis (and indeed the Calibre) is conservative in terms of reach, and for some people that can be a bit of a sticking point.

All things considered, this is still a really good way to spend £1,000 on a mountain bike.

By combining well-chosen parts with well-balanced geometry, Vitus has created a fun and versatile bike in the Sentier. Steve Behr

With a 10-speed Shimano Deore drivetrain that uses a SunRace cassette, Tektro brakes and WTB tubless-ready wheels wrapped in Schwalbe tyres, it’s easy to forgive the Sentier for its lack of dropper post.

The X-Fusion RC32 fork performs okay once it’s into its travel but struggles with off-the-top suppleness. However, the headline 13.26kg weight makes this one of the lightest bikes in the sub-£1,000 category.

The geometry isn’t as progressive as Calibre’s Line 29 but still looks pretty good for a trail bike and the ride confirms this with snappy handling making it fun to take sharp turns or just ride mellower trails.

Going for a slightly larger size than recommended should improve handling if you’re looking to shred, but the Sentier is better-suited to tamer trails. 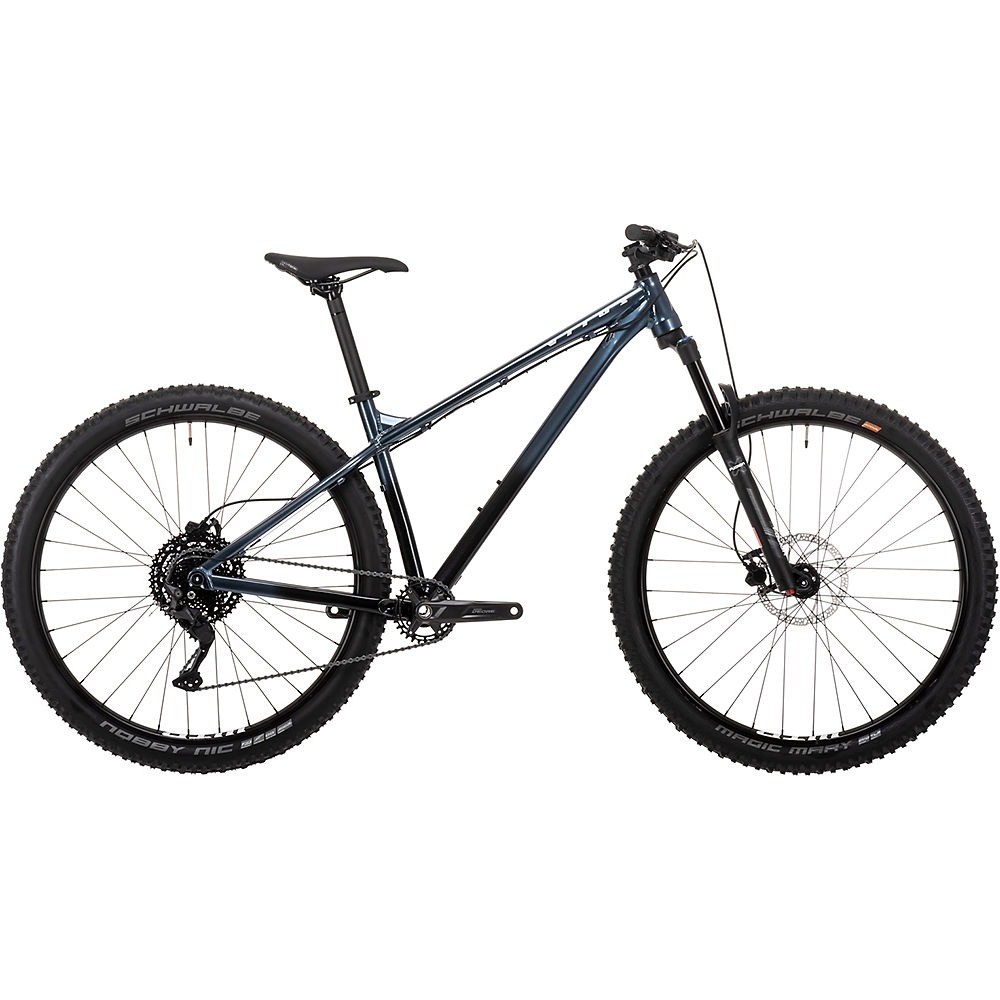 The Fuse frame, with its smooth welds and rich paintwork, looks sleek and reassuringly expensive up close. Steve Behr

Our tester found the Specialized Fuse hardtail to be a comfortable bike to ride. The plus tyres offer plenty of grip and the 1x drivetrain and dropper post perform well.

Even though our tester struggled with the sizing on the XL bike being too small for his 192cm height, this issue is likely to be less pronounced for people who aren’t as tall.

If that’s you and you have your heart set on a bike from the Big S, the Fuse 27.5 is worth a look

Welcome to WordPress. This is your first post. Edit or delete it, then start writing!